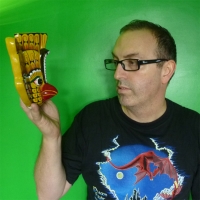 "Global Goon's Jonathan Hawk is a former programmer from Lydiate who earned a recording contract with Rephlex Records before moving to London and being Richard D. James' (aka Aphex Twin)'s housemate.

He had been making electronic music using SoundEdit 16 while supporting himself with various programming jobs. After moving into a shared house with James, Tom Jenkinson, Chris Jeffs and Grant Wilson-Claridge, he released his first album Goon on Rephlex in 1996.

Rumors that Goon actually was an alias for Aphex Twin persisted even after the release of Cradle of History two years later. After releasing Vatican Nitez four years later, he left the Rephlex label and started his own label J-HOK records, which he released 3 albums on. He also released one album on Audio Dregs, and two albums and one EP on WéMè. Global Goon has also released 5 acid records under the alias Syntheme on both Planet Mu and WéMè between 2007 & 2009.

Music critics have characterized Global Goon's style as ambient music and as "easy listening fusion". From Bessemer Cocktail and after, his music took a turn towards acid house rather than the easy listening downtempo"

Not enough? Please be aware that The Goon is available for banging live shows, and he performed at many Upitup nights in Liverpool, as per Bloc festival and Bangface.