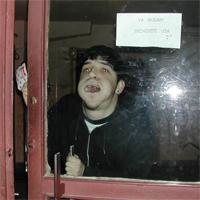 First of all, he is a very modest guy. How does it sound to you: "I'm just my biggest fan!". Seriously, just check his last.fm profile! Candlestickmaker was born and resides in Craiova, Romania. 21-soon-to-be (legal in every fuckin' state!), student (part-time), working full-time... fullest-time. His name's Alexandru M. Seidiu.

The first electronica sounds he'd ever heard and he can recall of were during the early 90s : Krrraftwerrrrk and Jarre and Enigma too, thanks to his lovely dad. Not very influenced, though. A decade passed and he can remember staring at Aphex Twin videos in mid 90s-to-early-00s. Just that. Staring. But producing music occurred after an older and wiser friend (there's always an older and wiser friend in such stories) made for his 18th anniversary a DVD with indie & electro stuff: Wisp, Autechre, Aphex Twin. So, our youngster became interested in various electronica acts and said: "I can do this shit!". And eventually asked his older and wiser friend for some piece of software for music creation. The big crash (or clash?) produced and it was called Ableton Live 5.

Achievements and things to be proud of: 8000+ profile views on MySpace, 1000+ pageviews on deviantArt. Seriously, he considers his biggest achievement the moment when releasing a tune sounded good to himself and received good feedback from other people (not including friends here!). Also: playing shows in Romania (TMBase 2007. The crowd was fantastic!).