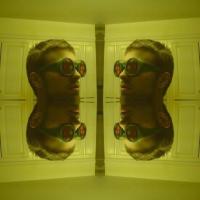 Pariah Qarey (aka Dr. Jadge) aka George Maund hatched in 1985 - the year you see in the Back to the Future films, the year after Crass called it quits, and the year before the Challenger space shuttle disintegrated on take-off.
he has made music on computers for about ten years, moving through instrumental hiphop & beasties remixes, to ambient installation collaboration pieces, to a failed big-beat revival album. after taking a break to do rock-band-related activities, PQ met some inspirational liverpool-based characters in the guise of Jacq Sporadic & Casino of Synaesthesia, and attended some heavy duty brutal electric music nights known as Class A Audio & Crack Zombie. after this PQ felt the need to sit back behind a big bright computer moniter again and see if he could still use the beatmapper function, originally invented by sonic foundry. "Pariah Qarey" became the name for the new project, trying to fuse all his favouritest bits from non-rock & yes-rock musics, whether it was hyper-fast like Creshesvky/Canavarro MIDI-classical, or slow & low like Critical Beatdown; dense & repeat-requiring like Autechre & u-ziq, or stark and arresting like Wagon Christ. PQ was asked to do a live set for Upitup in the summer of '09, and immediately after it was agreed that an Upfree release should happen asap. 'Tha Freewheelin Kubic Zirkonia' is what came next - a tribute / homage to the origins of hiphop -as it was- in the early '80s: in essence, a multi-faceted moment of culture. PQ professes that the genre is predominantly Superstep, with hints of Sugna here and there. PQ enjoys basketball in the rain and discussions about how to mix your own paints. PQ stayed inside for the summer so you don't have to.