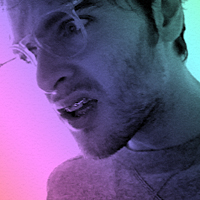 His conceptual approaches have always helped us come up with shit, he makes sure everything remains raw. In his free time he writes about music theory and builds music applications in virtual reality.
People claim he gets angry very quickly, but it is always a pleasure to have discussions with this tall, white, and polite jellyfish.

With his debut, the legendary performance at the Lab30 festival in 2004, he proved that not only is he an excellent artist, but knows how to make them asses wiggly and your legs britney. His two albums Essig vs. Television and Out Of Disorder are already classics and among our best releases.
Ask him about his hobbies, if light-years were a time measure, he would take three of them to name all of them.