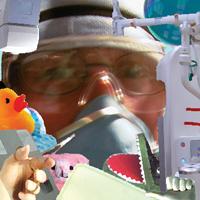 “The man is A. S. and his sound is most likely happier than you’re used to hearing. If you ever witness a pregnant squirrel giving birth to a rainbow of sunshine on a carnival’s ferris wheel surrounded by kaleidoscopic ballons, overjoyed by the fact that you’re having the best panic attack ever and you need a soundtrack to capture the moment in dysfunctional Kodak memory then Drex Rekker should be your conductor for the night.
It’s the sick marriage of cowbells, farm animals, bubbles, babies, fluctuating melodies, and old school drum machine beats with what i’d brag to be 100% vst free sound collage. Pure, unfiltered happiness cannon blasting your ear drums with a simultaneous hug.” by Michael Castaneda (Terminal11)