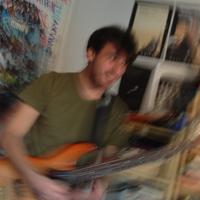 You already know we’ve got a load of fresh and unique artists here- but can they perform their sound live on stage? Do they just press “play” and stare into their laptops? Hu? Do they? Not the allmighty Uptowners, a collective of dedicated musicians, playing live bass, drums, guitar, piano, synth and sometimes celery or a jew’s harp. Upitup’s greatest hits never sounded better before!

The Uptowners mainly consist of our friends who accompany us at gigs. The amount of members varies - permanent insiders like Elel and Tucardo haven’t started releasing solo stuff yet, but they’re the part of the family that holds everything together. Common jam sessions and their support at shows are what makes us more than just your favorite superheroes on the net. We become REAL. “If you wanna know, we should mention their fantaspastic FEAR festival in Rome (July 2003) when them all stinky buccaneers met for the first time and had their first (and only so far) real gig! Improvisation galore – you could see Pierlo inside his world infamous pgdgbox, Jonas The Plugexpert signing authographs to jumping jellyfishpussies and also Tracky B hitting the crowd with drumstick shots –
unfortunately all of this got lost in upfree05 due to a drunken mixerguy who recorded the whole thing with a broken cable. Nontheless you’ll have lotsa fun checking it out and listening to isocore's devilish mosquito-killing hi frequency that made the crowd escape!”