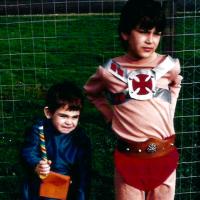 When most of us still carried milk in their flask, Pierlo brought along his big brother Giuseppe and they double-handedly created both the programming part of upitup.com v.1 (known by most people as the good olde uptown) and upfree00 - "The Profi-Brotherhood E.P", our first ever upfree.

Futuristic to us, Pierlo and Giuseppe produced that slick, synthetic and yellow hi-fi sound while writing scripts and code that didn't only feed the open source movement, but basically conceived this awesome/ful label thing.
With their rooms next to each other it was only a matter of time when Via Monte Peloso would become the secret tech lab of upitup.

Square bass or Database, the Profi-Bros got you all in check!