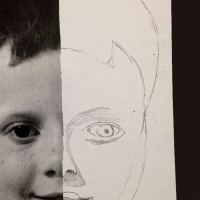 "I need say nothing, only exhibit’… "

A very welcome addition to the upitup family and catalogue, Germanager’s thought provoking esthetics sit comfortably amongst the other upfrees, exploring various styles and embracing diversity and the new newness of post-postmodernism, merging his own practical artistic expression with critical investigation.

Sleeve Notes:
Whilst procrastinating over starting to write these words I googled Germanager. There's only one picture of him on google images, so I clicked on it and saw it was from his one review to date. It was not a positive one, and led to a protracted online debate where it was suggested the reviewer had missed the point. but this wasn't so surprising, Germanager's music can be as challenging and befuddling as it can be tautly beautiful, symphonic.

So I clicked on the pic and I saw in the suggested images another one of Germanager, but it appeared upside down for some reason. When I clicked it turned out it was his profile picture from his LinkdIn page, still upside down. Now let me tell you that's classic Germanager. Taking an everyday process that the majority of us zombie our way through and gently subverting it. Although it's upside down, the photograph shows a man with a subtle smile with no trace of smugness.

Yes he has a LinkdIn page. He has things to do. He gets out and about. But when he gets home he makes music. Sometimes for hours on end, sometimes a quick ten minutes before brekkie. That's just what he does. and all those everyday processes he plucks out whilst navigating round our modern life make their way into the music. gently dissected, digested and subverted. Being beautifully unsettled can be very soothing, especially in times such as these.

It's great he's sharing it with you.