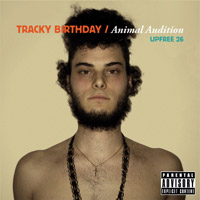 More Pictures: Related Links: Other works by this artist:


About the release:
Welcome to the Animal Audition! A world full of curly earworms and musical crimes. A set of unfresh raps over uncool beats. Minus times minus equals plus! Tracky Birthday is HipHop's antimatter and Disco's daughter's new boyfriend. Welcome to your new favorite album.

The musical styles on this masterpiece range from Tiki to Disco, from Polka to Rap, from Carnival to Other, from Surf Rock to 8-Bit Techno to Dub. If awesomeness was able to ride a bike, Tracky B would have to brake uphill!

It took forever until he finally released a solo album, while 'solo' doesn't mean Tracky missed the opportunity to have his friends join in too:

"Hasi International™ and I had so much fun writing the low-brow lyrics and recording them at 3a.m. for the Intro, but after re-listening the next morning we were kinda shocked. I made Rosie sing over it, but I still feel like getting dumber every time I listen to it. I can feel my braincells die.
We also recorded Hasi's message for Obligatory Answering Machine Skit that night, which also contains a short sample my buddy Seecoy sent me.

Free Dschimi is a tribute to my idols Martin Denny and Arthur Lyman; check my self-made bird cries and the de-tuned ukulele in the end!

The middle part of Balla! features all voices my Yamaha keyboard PSS-390 has in the instruments bank. My song should be on its "Demo" button!

Last year M-Boy and I invited our friend André Herzer to play a fat bassline and some guitar for us to be used in a new Discoghosts track. I finally finished the song while M-Boy is somewhere in India or Vietnam, on his world trip..
The second part of the song is something we had dismissed, but I thought it actually fits. I wanted to keep you from forgetting about the geists!
The title, Eöööhh! is what soccer fans yell, trying to immitate those air horns. We've been using that exclamation at parties or as a greeting since the World Cup 2006 in Germany...

Roglok once sent me a loop and said "here, I can't use it"; I secretly passed it on to Vernon LeNoir who remixed and returned it as "Roglok's Journey to the Belly-Button of the World". I quickly added some scratches and crappy raps, and it became the closer for my album and is now simply called Good Bye. First time Roglok hears what we did to his loop!

Track #10 is a beat Dragan Espenschied of Bodenständig 2000 made for me; I used the opportunity to express my love for the internets. The sample "Für Mich Seid Ihr Alles Raver" by German wanna-be bad boy rapper Bushido means "you're all ravers to me", as if ravers were something bad. Needless to mention that drx proves him wrong!

The last song I recorded was Overdosie Rosie, an early Christmas gift for my wife. I created the Surf Rock sound using an analog spring reverb Roglok built for me... Just ignore my attempts to play guitar :)

Really hope you enjoy my album, feel free to contact me! Keep on, Gibbons.