The Albano & Romina Power Of The Balkans 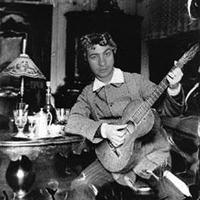 When he was asked to describe his motivation for using samples, cutting them up and glueing them together to create a plunderphonic wacky-world, Vernon compared it to "the feeling when you step into a garage, jam-packed with all types of junk, getting squeezed by the dazzling impressions that make you -as David Lynch puts it- dream; it means making an emotional experience, giving yourself up to a certain sentiment..."

And boy does he have fun incorporating all those junk elements into his music! When performing his trailerpark polka live, Vernon seems to become one with his sound, an element himself, wearing a wife-beater and gesturing like a gipsy fotuneteller's raven.

The Berlin-based philosophy student regularly airs his show "Bekteshi's Grillstube" on Hyperground Radio, and recently just did a special for Phuj Phactory which was played by Ergo Phizmiz on New York's WFMU Radio.

Is Vernon's music an artform? I don't know, I'm not an artform critic. But I can surely tell you it's a crime!